Im not sure what I expected from Summit. Maybe some speakers & parties & workouts. Maybe meet a few new people, make some new friends, get some scoop on new Beachbody products coming out. It was all of that. And so very much more.

Since I only became a Beachbody Coach about four and a half months ago I had only heard stories from my upline coach (Stephanie Richardson- the friend who got me into all of this) about Summit. Its a HUGE gathering once a year of all Beachbody coaches who register to go. About 10,000 coaches attended this year in Vegas. VEGAS! Beachbody knows how to put on a party…there was some serious bling. I wore heels THREE NIGHTS IN A ROW!! Ok I changed into flip flops after pictures but whatever…it still counts. Sequin dresses, standing room only parties with DJ’s and flashing lights & drinks & food & Wolfgang Pucks & SHAUN T. I got my picture taken with Tony Horton AND Autumn Calabrese (creator of the 21 Day Fix program). There were also amazing speakers. Darren Hardy who wrote “The Compound Effect” spoke and he was AMAZING! If you have not read this book go read it NOW. It’s not just a business book its a life book. Its about how small, seemingly insignificant changes over time add up to big results in the long run.

Diana Nyad also spoke. That chick swam for freaking EVA across the ocean!! And for a girl that’s rough around the edges and doesn’t really like to cry I think I went through 3 tissues during her two hour talk. What an incredibly brave, resilient, stubborn, intelligent woman she is. Her story is unbelievable. I can honestly say she’s the best speaker I’ve ever heard in my entire life. I don’t do excuses- don’t believe in them. But if I did she’d be the thorn in my side. Whatever your excuse or reason or injury or fitness level or obstacle or tragedy is there is someone who has had it WAAAAY worse and did it anyway. NEVER GIVE UP. NO EXCUSES.

Amongst the celebrities and top trainers and big time coaches who made millionaires club and elite status and grew their businesses to the n’th degree there were some real people. Those people were my favorite. The guy who lost 202 pounds by starting P90X and only being able to do a few minutes in the beginning but didn’t stop for over a year. The lady who left an abusive relationship and lost 88 pounds to get herself back. The military wife who was living paycheck to paycheck and not only lost a ton of weight but turned her familiy’s finances around. There were endless stories and THOSE people were the bomb.

The entire theme of the week was NEVER GIVE UP. Its a catchy slogan and we use it a lot. But never is a long time. And some obstacles are BIG. Sometimes the hand we are dealt aint so fair. Nothing pretty about illness or cancer or despair or depression. Nothing. But it still holds true that you are just a result of the choices you make. You are not your obstacles you are how you respond to your obstacles. We all have our “stuff” its how we CHOOSE to deal with that stuff that defines us. Curl up, give up, wave a white flag and surrender OR STAND UP, MOVE FORWARD AND FIGHT. Even the prettiest packages have “stuff”. Kick your stuff’s ass and NEVER GIVE UP!

Of all the amazing things I took away from my time in Vegas one stands out. Friendship. I have been so lucky to have so many great friends in my life. Some old, some new. And Summit was mixed with both. I got to room with my fellow high school cheerleader and my new Colorado friend. Im not sure why but I knew they’d hit it off. And they did. Susie & Amy bonded for sure. We all did. I can’t quite put into words how I feel about these girls now. I do know I’d better be nice because Im pretty sure theres an incriminating video of me in their possession 🙂 And the new friends I met there- WOW! Some of the sweetest, nicest, kindest, giving people Ive ever met. Its weird what 4 days crammed together in Vegas can do to people.

Next year’s Summit is in Nashville & IT IS ALREADY BOOKED! Seriously- there’s a waiting list. 16,000 coaches have already registered! Thats how amazing it is. How amazing this company is and what they are doing to end the trend of obesity in this country. I know I cannot wait until next year. Glad I got my ticket. Glad I went this year. Glad I met some amazing people. Glad I believed in ME enough to give this thing a shot. VERY glad! 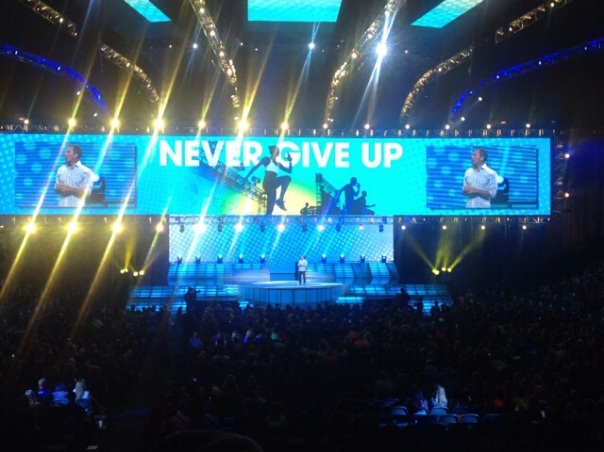