I’ve had a few people tell me us “Texans” think we are a country in and of ourselves. That we think we are special. That for some reason we think Texas is “better than” the other states. And they can’t quite figure out WHY we think that. Of course they can’t. You’re either born in it or you’re not. You can’t explain it.

So living in Colorado has opened my eyes to the fact that there ARE other states in America! Of course this is all in jest and Im mostly being sarcastic. I absolutely love Colorado. I don’t think there’s a doubt about that. I belong here now at this point in my life. It is amazing and beautiful and peaceful and I cannot imagine leaving. I am happy. HAPPY! But make no mistake I am a Texan. Fifth generation born and raised there. There are so many stereotypes about Texans. Pretty sure I bust apart all of those stereotypes. Funny. I don’t think it gets more TEXAN than me and I don’t fit MANY of the stereotypes. I do, however, fit a few…..

On Friday nights, in the Fall, in Texas, there is a religion we follow. A drum beat we all march to. A fellowship of sorts that is hard to explain. And I was beyond privileged to be part of that tradition. Friday night High School Football. Until the age of 40 I thought that all High School Football Stadiums would seat over 10,000 people. I thought all towns shut down on Friday nights. I thought all schools dismissed a tad early on Fridays so the Band, Drill Team, Twirlers, Coaches, Cheerleaders and Football players could board the bus and get to the field early for warm-ups.

I cheered at every High School Football game in High School. And until I graduated from High School and went back I had NEVER seen any other perspective of a game in person except from the sidelines. I never really thought about that. For four years as every game was played I stood eye level to the field. I stood below all of the spectators and parents and watched from behind the team. I stood steps away from stinky, smelly, football-pants-wearing players. And believe me that has it’s positives as well as its negatives ;)-.

I only saw plays THROUGH the gaps in the players as they sat on the bench or stood and ran and cheered as we moved the ball. I heard all of the curse words and speeches the coaches were blaring at the players. My feet only touched that rubbery, knobby red track material…unless we were performing at halftime on the field. I never sat in the stands. I never knew what that experience was. It’s funny how different a football game can look depending on your perspective. I’m lucky I had the one I had. And a few times I got a pretty good birds-eye view when I was on top of someones shoulders or on top of a pyramid. This morning on the way to school I asked my daughter if she was excited about this coming Friday night…she said “yes but I don’t get to sit and talk with my friends in the stands”. She has no idea. NO IDEA how great of a “seat” she will have. She will quickly figure that out.

This Friday night is our local High School’s opening game of the season. I will be in the stands. Watching from a different perspective. And by that I mean I will not only be watching from the bleachers with the other parents now….I’ll be watching AS a parent. My daughter will cheer at her FIRST VARSITY football game Friday night. On NO planet does it make sense to me that I have a kid in High School. How the hell did I get that old that fast. Funny- in my head Im still the same girl. Maybe a tad more mature….MAYBE! :)-

I LOVE football. I always have. I watched the Cowboys from the time I was born. When you are a fifth generation Dallas-ite that is what you do. It is engrained in me. Football really is a metaphor for life. The grind, the hard work, the discipline, the aggression and patience, the team work, the camaraderie, the fighting through the pain. I hope she will love it as much as I did. I hope when the band plays the fight song and the lights come on and the sun goes down and the players run out and the people cheer that she will relish every second. I might be more excited than her about this Friday. Maybe that’s because I now know how special it is. I now know how lucky I was to grow up with it.

I took one of those dumb Facebook quizzes recently called “How hippie are you”. I got 50%. And it did not surprise me. I am a peace loving, pot legalizing, nature loving, save the environment, pro gay rights fighting, German car loving, big mouth. But I am also a football loving, competitive, ball crushing, pray before a game, protect my property, kick your ass in a parking lot kind of girl who once owned a Harley. Now go figure THAT out….because I STILL haven’t. In a day and age where so many things separate us…football unites us. If even just for a few hours on Friday nights in the Fall. 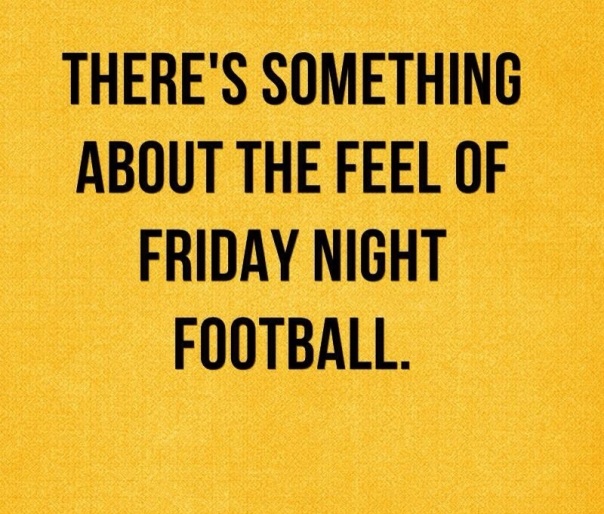