I had a great weekend in Austin. Despite my sister’s garbage disposal going out, sewage backing up into her house, and her car not starting…it was pretty cool. I went for a concert. To see the Dixie Chicks with my Mom and sister. But lets be honest….the concert was on the 10th Anniversary of my Dad’s accident and I went to be with them. My nieces happen to be the cutest kids in the entire world so that helps too. I slept with the little one. She’s a hoot. And it’s been awhile since I’ve been around little people who leak and talk a lot.

Man life can throw some shit at you. It really REALLY can. Cancer, divorce, bankruptcy, terminal illness, loss, house fires, unexpected moves, brain rot, a child with an illness…I’ve known people who’ve dealt with all of these. Some are doing ok. Some not so much. We all deal in different ways. And there’s no wrong way. There isn’t. There’s a few significant events that will happen in your life that will change everything. And you have a choice. A choice about how you respond. So many choices were taken from me. From us. I don’t get to have a Dad. He died on a highway alone. I don’t get a husband who can hike or run or live a really long time. Just the shitty hand I was dealt. We were dealt. But how I walk through that is all on me.
And let me tell you. There were days rolled up in a ball on the floor crying. Over my Dad and over brain rot. Still are at times if Im being honest. But I have CHOSEN to accept and smile. Because what is the alternative? Happy is so much more fun than sad. Smiling is so much better than crying. Laughing is pretty awesome. Adventure and hiking and traveling and concerts are pretty cool too. It’s a choice. Not every day…but every single second. I choose every second to be happy. To be positive. To find the good.
So my Mom, sister and I laughed, rode a pedicab, sweat our asses off, drank beer, sang like banshees, danced in the aisle, nearly got in a fight (Ok that was just me), and had an amazing time on August 7th. Can I just say…I’ve been to a lot of concerts. This was one of the best. They are AMAZING. That voice. Those words. The way they play those instruments. True talent. And one helluva concert. I’d see them over & over. And they made me giggle and laugh and sing on a day that maybe I wouldn’t have. But Im taking back August. Scratch that. I TOOK BACK AUGUST. Smile…its kinda fun. And makes people wonder what your up to 😉 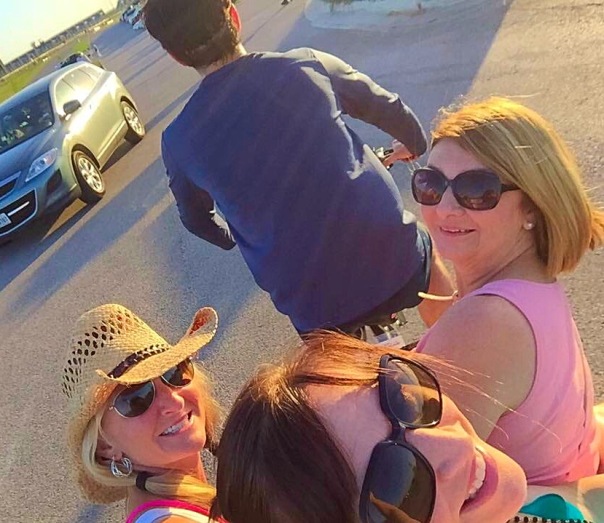