I am one. Despite what a few people say I am tougher than I seem. Most of the women I associate with are very tough girls. Very. Some days I say it out loud to convince myself. I don’t give a shit what anyone else thinks. It doesn’t matter. But going home gave a little perspective on exactly what “tough” means. What it can mean.
I visited my Dad’s grave for the first time is YEARS. It seems every time I ever go to Texas I have a reason or excuse not to go. Kind of like I’d never been to the spot he died until two years ago. I just wasn’t ready until then. So I grabbed a few beers, hid them under my coat, drove to the cemetery and got out like I owned the place. You need a key to access the private building where he is. My friend, Nancy, is also in the room as well as a sweet boy I knew named Clayton. I got to say hi to them too. Im sure they laughed about the beer.
So there was this table thing set in front of my Dad’s internment that had dead flowers in it and covered some of his name. I didn’t like that they were dead. Or that they covered his name. So I moved it. Across the room. And replaced it with a Bud Light. Little insight to me as a girl- I ALWAYS prefer beer to flowers….especially when accompanied by tacos. What can I say? Im a cheap date.
I said cheers, swigged some of my own beer and then sat down on the floor. I rambled a little about cheerleading and the kids and hiking and how the Cowboys are doing.  I said some other stuff I’ll keep private. And I asked for advice. Seems a little silly but…then I looked closer at the little table thing in front of his marker and it said in little letters on a sticker “Huang Lee”. I was a bit puzzled until I looked ABOVE my Dad’s marker where a very fresh internment with Mr. Lee in it had been placed. Those flowers WERE NOT FOR MY DAD. They were for Mr. Lee. Shit. I should’ve known. My Dad has his own table set up in the room with pictures of him and his Harley, an arrowhead he gave a friend whom I notice brought it to him, a bunch of eagle statues and some other personal things but no flowers. Dad’s people aren’t really “flower” people. Funny. Im not either.
God damnit I lost it. Started bawling like a baby and Im not sure why. It wasn’t the dead flowers, it wasn’t the table, it wasn’t that Mr. Huang Lee was now on top of my Dad (holy shit), I don’t know what it was. I just felt so very sad. Funny. Ten years can seem like a long time. Except when you are grieving. Time makes things a little less intense but it doesn’t fix things. And there’s things I need to tell him. I need him to give me advice on. Instead of being told how “brave, tough, full of character, steady, stable, doing the right thing” I am….I just needed a hug. From him. I don’t want to be tough all the time. I don’t want to do the right thing all the time. I don’t want to have character all the time. Sometimes….once in awhile….I want to do just what I want to do and then cry.
I walked outside of the room to get some air and the seriously sweet team of lawn people approached me and my bellering self and asked if I was ok in broken Spanish. I said “yes”. Then I realized I was still holding my beer. I sort of chuckled, raised it up in the air and said “cheers” to them. Then I left. Im sure they thought I was nuts. Then….several miles down the road I realized something. Holy shit. I left the god damned beer on Mr. Lee’s table. FUCK!
I thought about turning around. Then I re-thought that. If he’s gonna be my Dad’s upstairs neighbor for eternity….Im pretty sure he needs to learn how to love beer. And I know my Dad would’ve offered him one if he could. Then I giggled, turned the radio up, and drove. Tough can mean a lot of things. 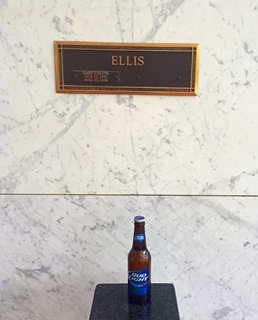